The 1975 are an alternative-rock band from Cheshire, UK. The band formed in 2002 and consist of members Matthew Healy – vocals/guitar, Adam Hann – guitar, Ross MacDonald – bass and George Daniels – drums. Through support acts with Bastille, Muse and the Rolling Stones, the massive hit ‘Chocolate’ and now two UK number 1 albums, The 1975 have gained quiet a large and loyal fanbase. The band’s self-titled debut gained huge commercial success and some praise from media outlets, now following that up with their sophomore record ‘I Like It When You Sleep, for You Are So Beautiful Yet So Unaware of It’.

Previously not being a fan of The 1975’s music, I have to admit that from the outset this new album shocked me a little. From the start it includes a range of genres and styles, from funk to new wave (‘Love Me’ & ‘Ugh’), which were a pleasant surprise, especially due to how well the band  have incorporated these into their sound. Songs such as ‘She’s American’ drift back to the bands original sound, delivering pop hooks, upbeat lyric delivery and a bounce to the rhythm section, everything required to obtain a decent chart position. We then move onto ‘If I Believe You’, a track which moulds gospel vocals with 80s electronic drums and saxophone solos, a mixture which seems to work really well, especially singer Healy’s vocals with the choir. From the instrumentals to the new wave sound, funk to atmospheric styles, I think the bands strengths have been experimentation on this album and a willingness to delve further into the genres that inspire them. The lyrics are well written, not too straight forward or too abstract, however the majority to focus on the extraordinarily over used topic of love, being confused about something and finding yourself. If I were to recommend a couple tracks they would be the songs ‘Love Me’ and ‘If I Believe You’.

‘I Like It When You Sleep …’ is a total surprise for me, I came in with this preconceived idea of how the album was going to sound, based on their last exploits (whether I should or shouldn’t have). The album I feel is unique, whilst also calling back on the bands influences, innovating on the genres enough to create something interesting and catchy. 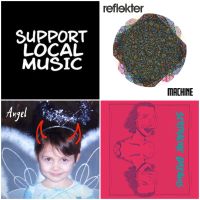